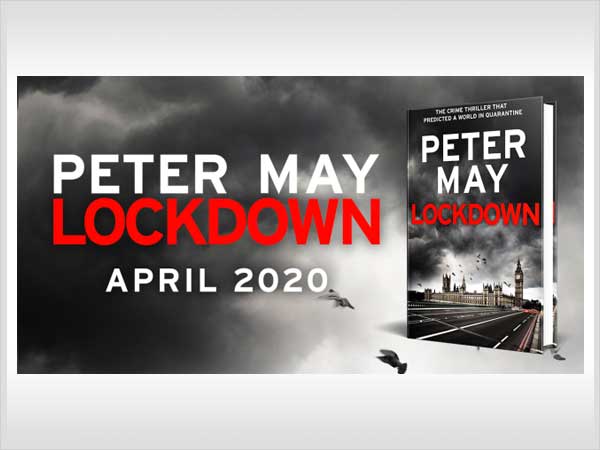 After a successful career creating and writing top-rated drama for British television, and with 8 novels published in the UK and USA, I hit a period around fifteen years ago when I could not find a publisher for anything I wrote. Books that were universally turned down included “The Blackhouse” (which has since gone on to win awards internationally and sell millions of copies worldwide) and “Extraordinary People” (which was the first book in what later became the hugely successful Enzo Macleod series).
Another book I wrote around this time was set in a London which was at the epicentre of a global pandemic. It was a city in total lockdown. A virus was claiming thousands of lives. Hospital and emergency services were in meltdown. The prime minister was dead and soldiers were on the streets to enforce a curfew.
The literary establishment was highly sceptical. It was OTT, unrealistic. A lockdown in London could never happen in modern-day Britain.
No one would publish it.
So I despatched the manuscript to a metaphorical drawer – a file in my Dropbox which has spent the last fifteen years gathering dust in the ether.
Fast forward to the year 2020, and London is a city in lockdown. Emergency services are buckling under the strain of skyrocketing infections. The death toll is mounting. The Prime Minister has caught the virus. And it’s only going to get worse, the scientists are telling us.

Strangely, many of the things I have written about during a long career in TV and books have subsequently come to pass. In my early years, while storylining the Scottish soap opera “Take The High Road”, there was a sequence of spooky occurrences. I wrote about a character falling and breaking his arm. Three weeks later that actor fell from a ladder and broke his arm. In another story I wrote about a character becoming pregnant. The actress became pregnant. There was a lot of nervous laughter about it among the cast. Actors hoped I wasn’t going to kill off their character – and not just because of loss of earnings. I had an actor come to my door once and ask if I could write a story in which his character won the lottery.
When it came to books, I seemed to be almost prescient. In the first of my China Thrillers, “The Firemaker”, I wrote about the introduction of a genetically modified strain of rice which goes wrong. Within a couple of years of publication the genetically modified “Golden Rice” appeared on the scene to be met with huge opposition from environmental and anti-globalisation activists. It has taken nearly twenty years for its successor to get tentative approval for commercial cultivation.
My 1981 book, “The Man With No Face”, was set against Britain’s uncertainty about its future place in Europe. Ten years later my book, “The Noble Path”, followed refugees fleeing from war, taking to flimsy boats to cross treacherous bodies of water. Sound familiar?
In “Snakehead”, another of the China Thrillers, I wrote about a truckload of dead Chinese found abandoned in Texas. They were illegal immigrants who had suffocated in the back of the trailer. That might sound familiar, too.
Also in “Snakehead” I wrote about bio-terrorists re-kindling the Spanish Flu virus of 1918 to weaponise it against America, and the research for that book provided useful background when it came to writing “Lockdown”, in which the virus that causes the havoc is a variation of avian, or bird, flu.

At the time scientists were predicting that bird flu would be the next major pandemic. And had it come to pass, the consequences would have been catastrophic. The H5N1 virus is, perhaps, less infectious than the current Coronavirus, but is many times more dangerous – with a mortality rate of anything between 60 and 80 percent. But the scenario that I describe in the book is not drawn from my imagination. It was based upon detailed pandemic planning done by both the British and the Americans in the early 2000s. These planning documents painted the horrific picture that I used to colour in the detail of “Lockdown”.
And we are now seeing that same planning swinging into action to deal with Covid-19. Unthinkable both then and now. But it’s happening.

In truth, I had literally forgotten about my unpublished book. It wasn’t until someone on Twitter suggested that I write a thriller set against the backdrop of a Coronavirus lockdown that I suddenly realised that I had already done just that. Someone else made the same suggestion. Then when a reader on my Facebook author page begged me to write something new to read during the tedious hours of quarantine, I suggested that I might publish an old manuscript from 15 years ago that was set during a global pandemic in a locked down London. The suggestion was greeted with a chorus of approval.
I mentioned it to my editor at Quercus, and he couldn’t believe that I had such a manuscript buried away beneath the layers of discarded pixels in my old files. He asked to see it, and in fact read the document I sent him overnight. I woke up the following morning to an email which declared it to be “a brilliant novel.” Suddenly what I had written about in 2005 was no longer “OTT” or “unrealistic”. It was actually happening.
The rest is history.

They say that every dog has its day. Maybe books do, too. When I originally wrote “Lockdown”, no matter how well researched or accurate the dystopian picture it painted, no one could identify with it. Now everyone can. It is our common experience. And isn’t that what writers are supposed to do – describe and explore the human condition, the world we experience as a human race?
I don’t claim the prescience that my writing history might suggest. But I think my interest in subjects medical and scientific, and the detailed researches I have done for my books, sometimes puts me a little ahead of the curve. And as I sit here in France, confined to my own home – like so many others around the world – I can only hope that there is a better outcome for us all than “Lockdown” might predict.